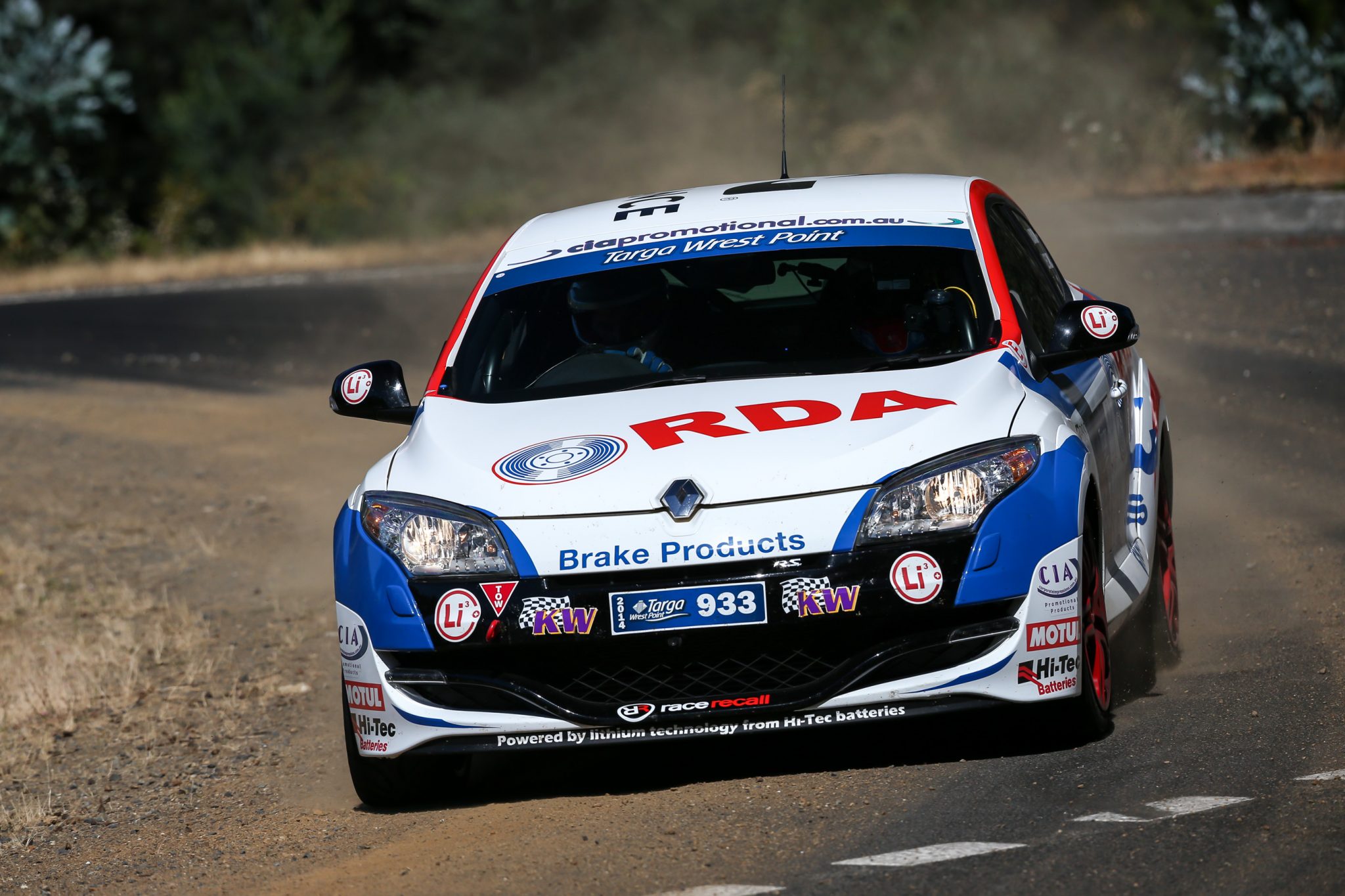 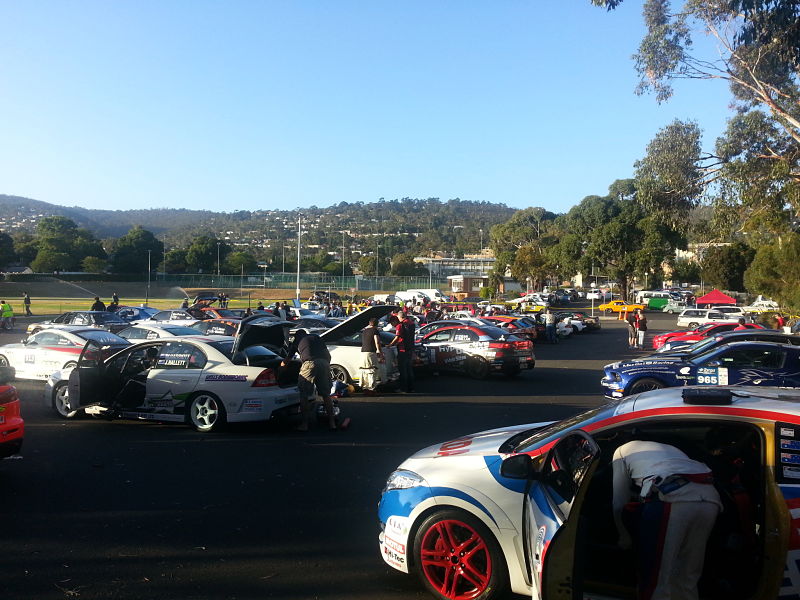 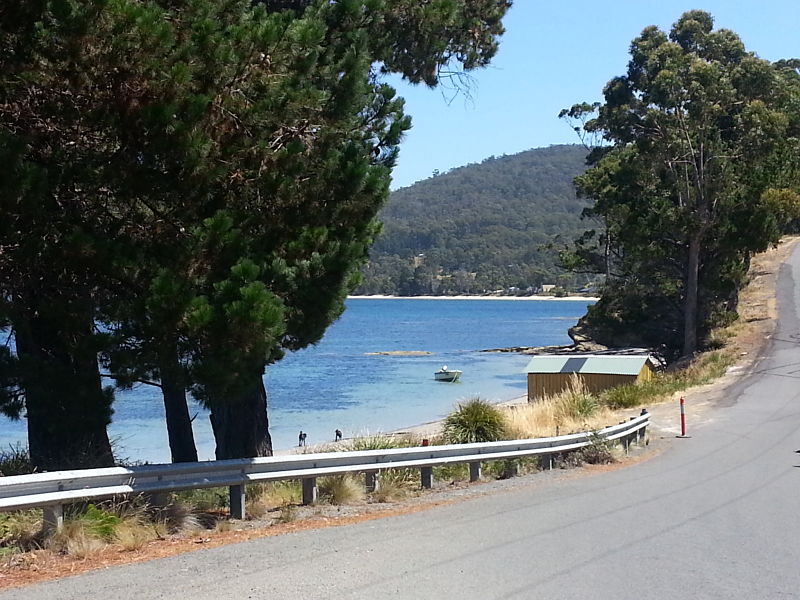 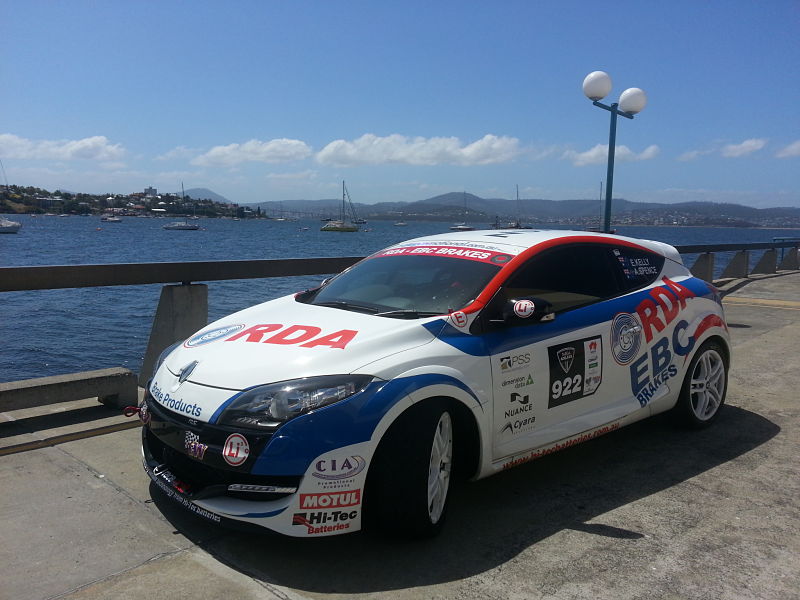 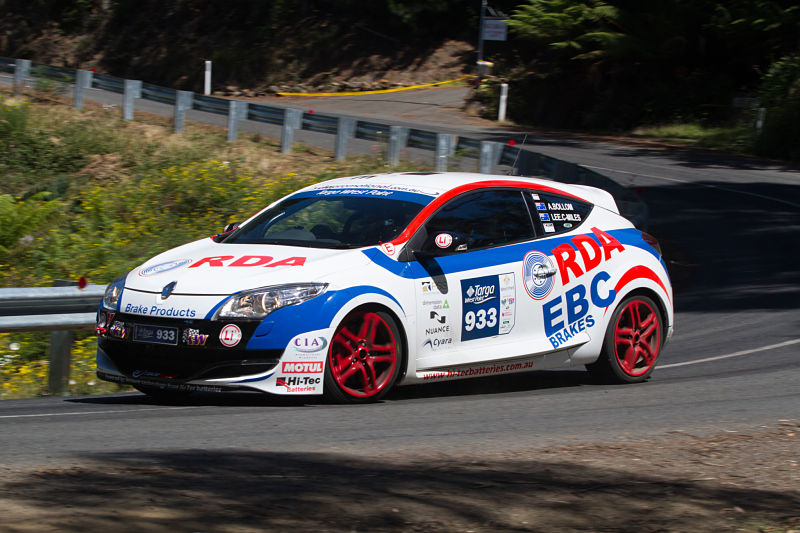 RedBack make it a hat trick of podium finishes

Redbackracing again made it a one two finish for the third event in a row in the 2013/2014 Targa Championship Series at Targa Wrest Point. The event which takes place around south Hobart and the Huon valley is a favorite for a number of the Redback racing team.

Adam Spence & Erin Kelly again led the Showroom category from the first stage, to the finish and with new team mate Andrew Bollom, whom replaced Bunj Noor in the driving seat, of the second Renault Megane.

With some adjustment to the suspension setup prior to this event the cars continued to dominate the Showroom category. Team manager Adam Spence “I am over the moon that as a team we have continued where we started this season. Andrew did an amazing job, the whole team did an amazing job!!!”

Andrew Bollom has returned to competing in Targa after taking 2 years out, in which time he was part of the Redback racing support crew, got grips with the Renault really quickly. Having spent the majority of his racing career in rear wheel drive rotary cars, the front wheel drive Renault would be a different challenge of which he is now looking forward to getting more experience and time behind the wheel.
The next championship event being Targa Tasmania in early the team are looking forward to carrying on their fantastic form into the biggest event of the Targa calendar.
The team at Redback Racing would once again like to take this opportunity to thank our major sponsors RDA/EBC Brakes, Hi-Tec Batteries, Motul and Corporate Impressions Australia for supporting us and thus enabling us to compete. We would also like to thank Nuance Communications, Cyara, Dimension Data and PSS for their continued support. 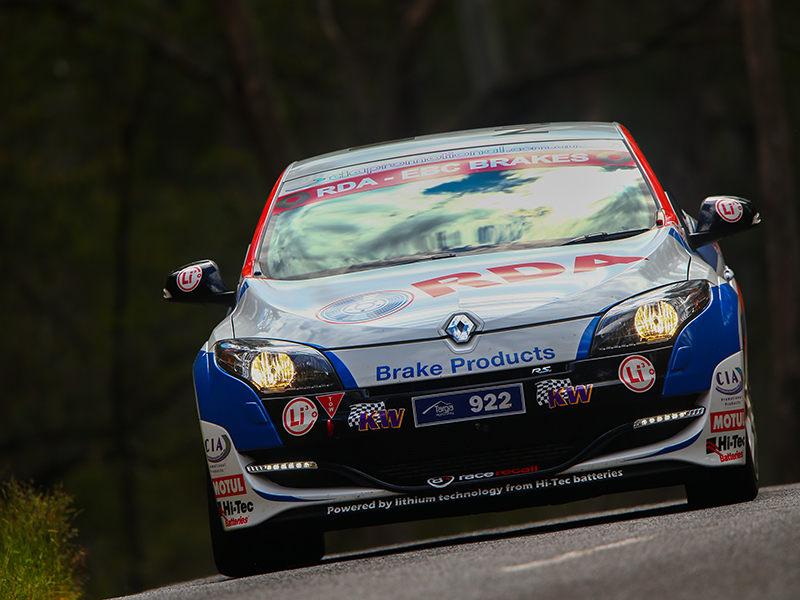 Redback Racing get another 1-2!

The Team of Adam Spence and Erin Kelly have won their second showroom 2WD win in a row and their second victory at Targa High Country. The even more exciting news is the Targa High Country event brought the team of Bunjamin Noor and Lee Challoner Miles onto the second step of the podium for the first time at this event but the second time in a row.

The team are now placed first and second in the Australian Targa Championship and are eagerly awaiting Targa Wrestpoint at the end of January in Hobart. 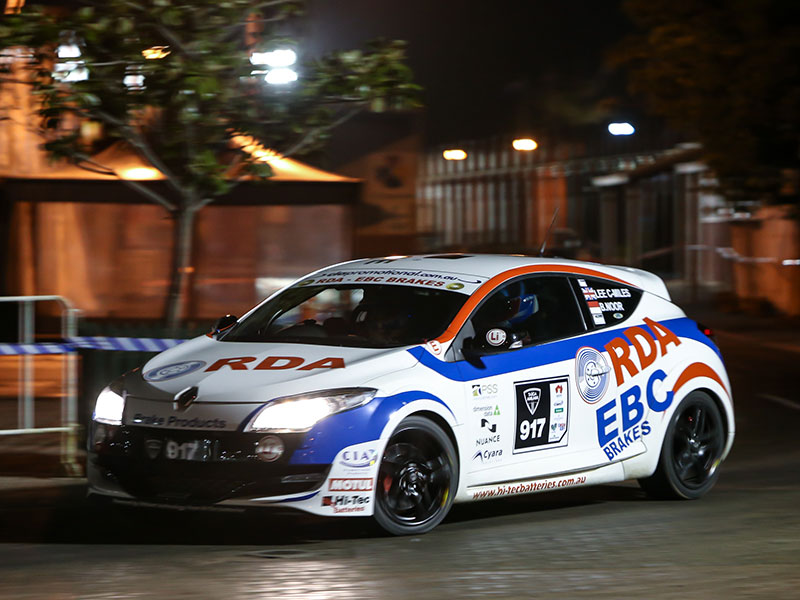 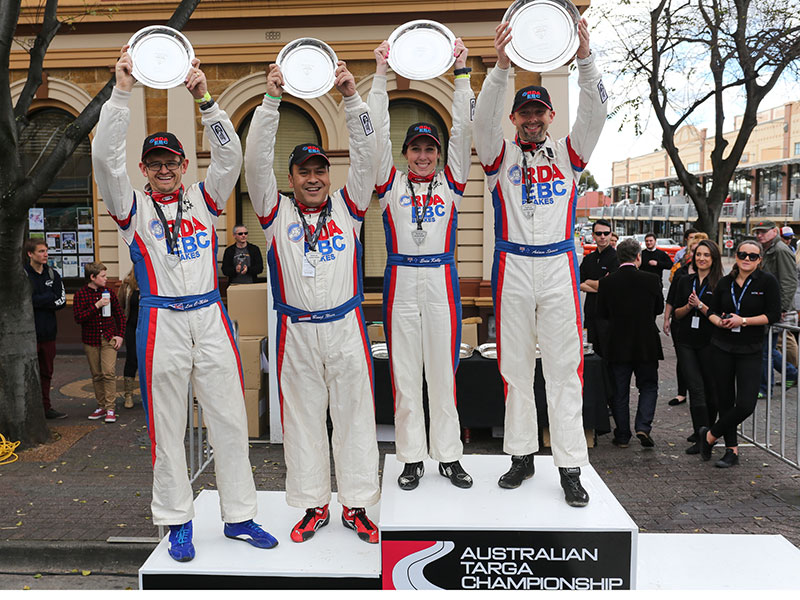 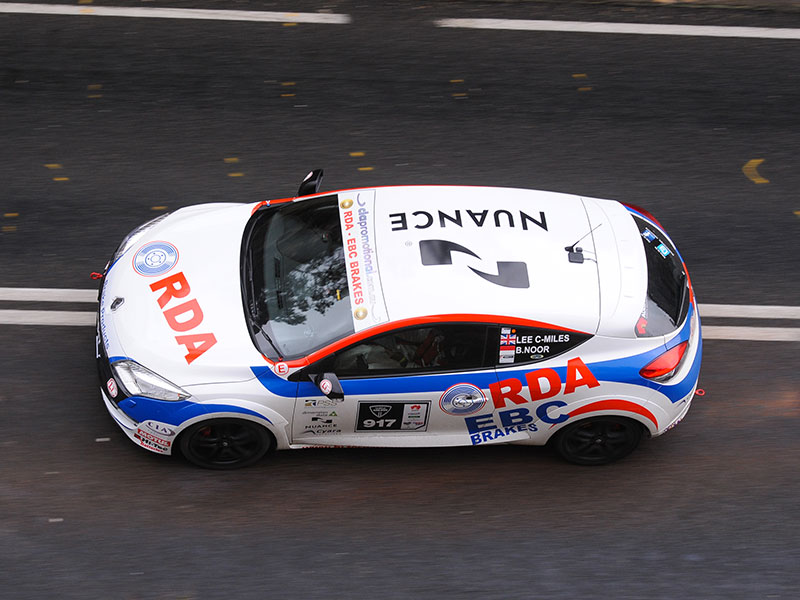 On August 25, the team at Redback Racing lined up for what was to be a brilliant result at the end of four days racing in Targa Adelaide. With their results of 1st and 2nd in Showroom 2WD category in their Renault Megane RS 250/265s and an outright finish in the top 12 for Adam Spence and Erin Kelly.

Redback Racing celebrate their 1-2 in Targa Adelaide"I would like to extend my sincere congratulations to Adam Spence, Erin Kelly, Bunjamin Noor and Lee Challoner Miles and the rest of the team at Redback Racing. What a fantastic result in the first Targa race of the season! A brilliant team effort and one that everyone involved should be very proud of," said Justin Hocevar, Managing Director Renault Australia.

The team now have four consecutive podium finishes and will again look to build on this success at Targa High Country in November and throughout the Championship in the lead up to the final event of the season Targa Tasmania in April 2014.

Adam Spence, team principle, said: “The conditions on the first two days of Targa Adelaide this year were the most challenging I have driven in with lots of standing water and heavy rain. I am very proud of the team, getting both cars to the finish of this event is quite an achievement. There was some very quick thinking and team collaboration needed to make this happen. “ 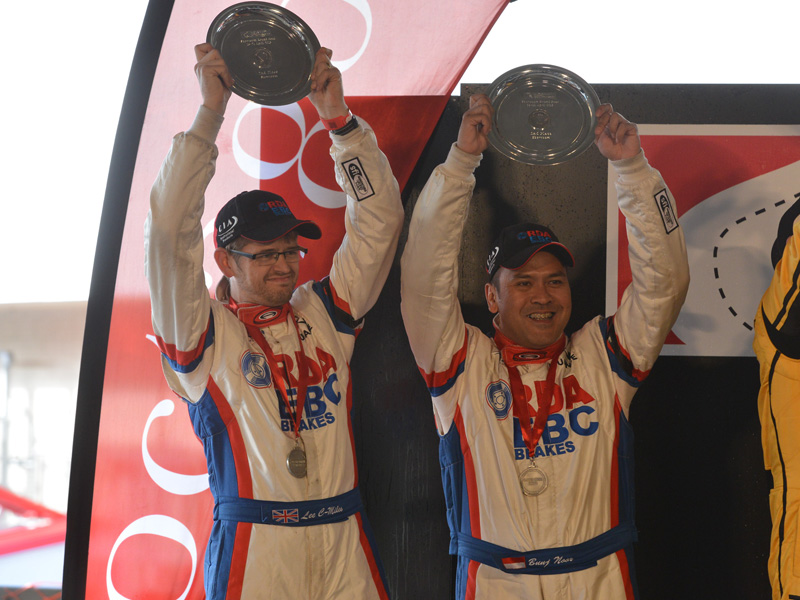 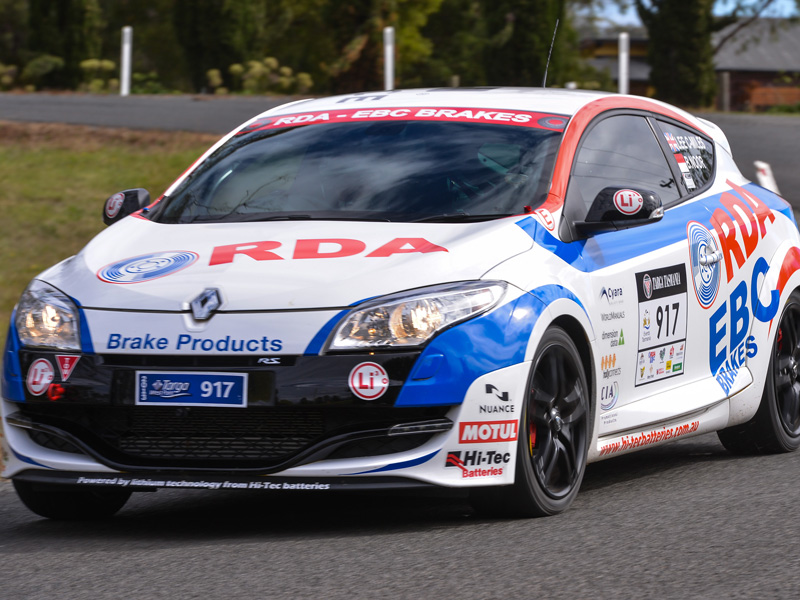 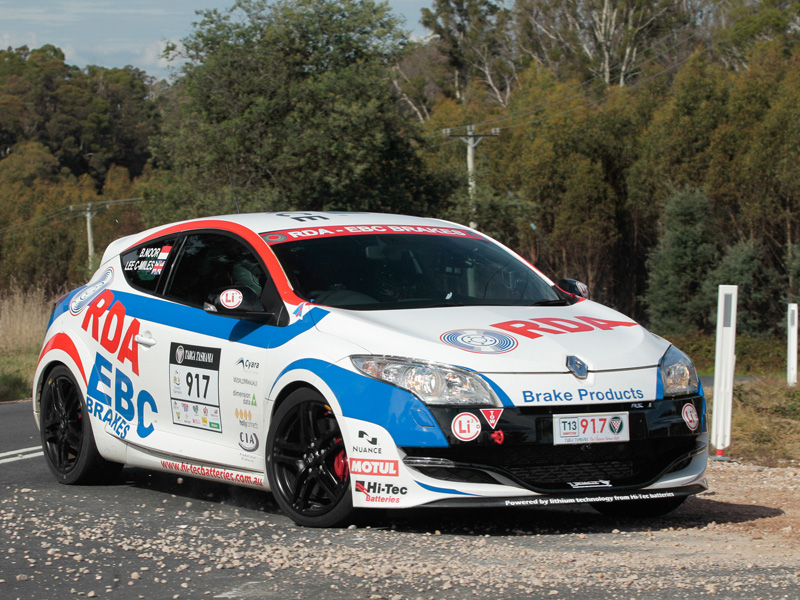 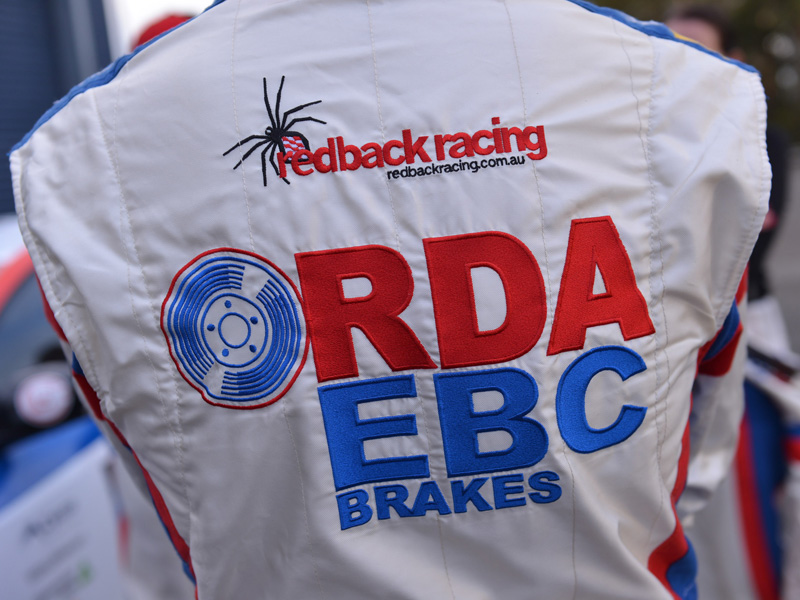 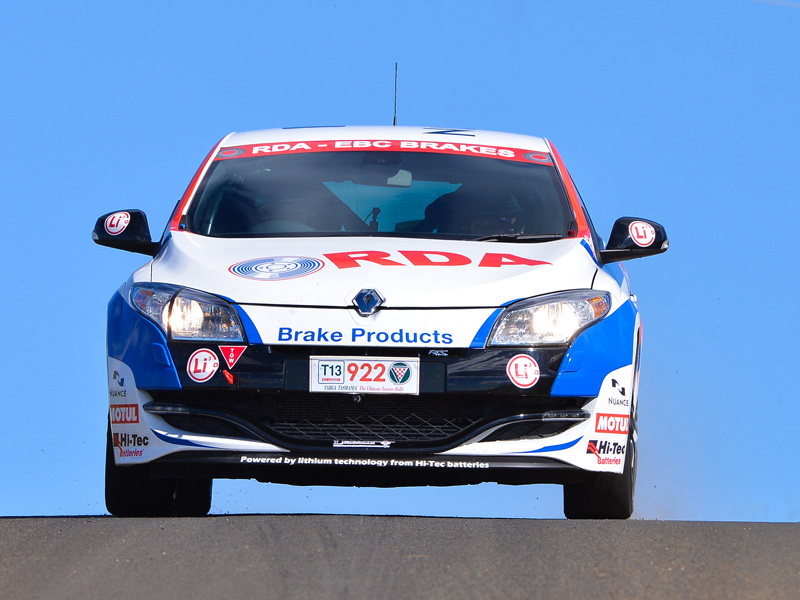 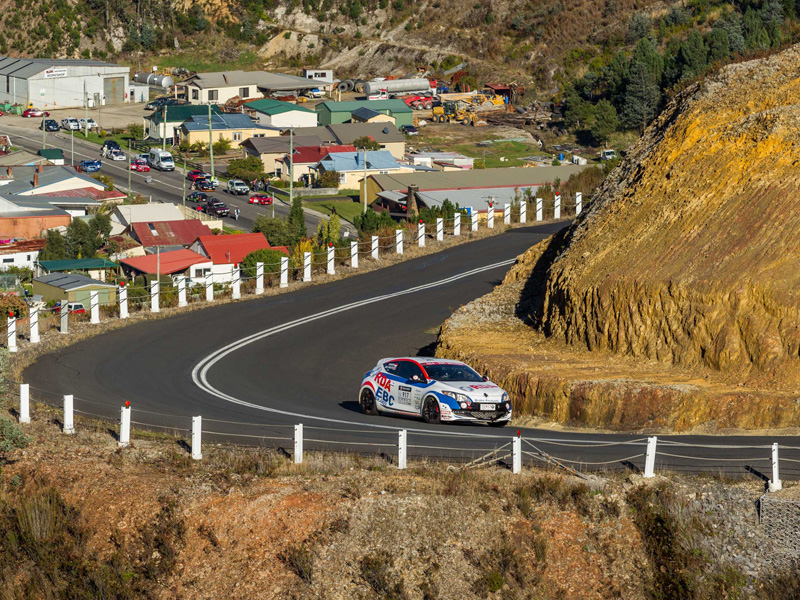 Redback Racing On The Podium… Again!

Redbackracing has again made it onto the podium in the Australian Targa Championship. Placing 2nd at in the grueling 5 day Targa Tasmania, Bunjamin Noor and Lee Challoner-Miles secured their 2nd podium podium finish of the season, placing the teams two cars 2nd and 4th in the 2013 / 2014 Targa Championship.

With mixed fortunes over the 5 days, commencing with the car of Adam Spence and Erin Kelly winning most of the stages on days 1 to 3, but crashing out at the end of day 3 on the notorious Rinadeena stage leading into Strahan and finishing with a hard fought 2nd place finish for Bunjamin and Lee who experienced engine issue for the final day.

Justin Hocevar, Managing Director Renault Australia, said; "I would like to extend my congratulations to the team at RedBack Racing for a fantastic week of driving at Targa Tasmania. The team have been consistently in front all season and this week was no exception. Renault Sport is an iconic name in Motorsport the world over and I am thrilled to see the dominance of all the Renault cars at this year's Targa Tasmania event."

Adam Spence, Team manager from Redback racing said “This championship season being the first for Redbackracing in the Renaults and having one of the cars in 1st position for their first two rounds and a fantastic 2nd place at Targa Tasmania has shown the professionalism of our whole team and has highlighted the Megane’s ability for Tarmac rallying. I would like to thank the wonderful team of volunteers who support us. We would not be therer without their commitment and efforts”
The next championship season starts in August, with the first round in Adelaide, the team will be starting their preparations straight after they leave Tasmania and taking the lessons learnt from this season and will be looking to repeat their earlier successful results and aim for one better to at Targa Tasmania 2014.

The team at Redback Racing would once again like to take this opportunity to thank our major sponsors RDA/EBC Brakes, Hi-Tec Batteries, Motul and Corporate Impressions Australia for supporting us and thus enabling us to compete. We would also like to thank Nuance Communications, Cyara, World Manuals, Dimension Data and Holly Connects for their continued support. 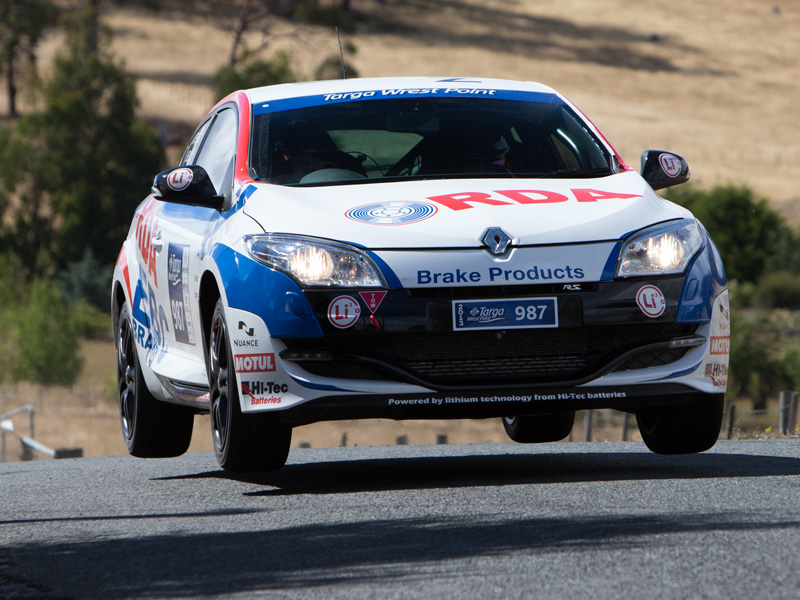 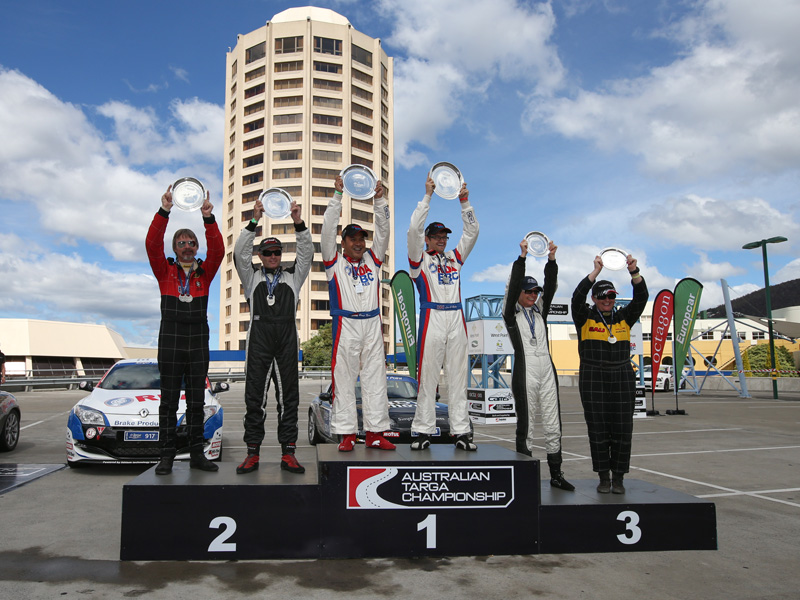 RedBack Racing Wins two in a row and makes history

Redbackracing has taken out Targa Wrestpoint 2WD Showroom category with Bunjamin Noor and Lee Challoner Miles taking victory, in the process making history by having a full international crew taking the win.

The team from Redbackracing arrived in Hobart full of confidence following on from their first outing in their Renault Megane RS250's back in November, in the 2nd round of the targa championship - Targa High Country finishing in 1st and 4th position.

The first stage of the event being the prologue and an easy base time, was an opportunity to get reacquainted with the cars before heading off to the Tahune stage. Adam Spence and Erin Kelly setting the pace right from the start of the first competitive stage with a fantastic time, 40 seconds ahead of their team mates Bunj Noor and Lee Challoner-Miles in second place.

Unfortunately for Adam and Erin the reverse leg of Tahune - Airwalk, was to see them have an issue off the start line. After a few kilometers into the stage the team parked the car to await service.

The teams second Renault then took on the challenge to push and take the top spot within the category.

On day 2 Adam and Erin won all stages but with were unable to bridge the gap back to the field, Bunj from Indonesia and Lee, English born, continued to set good times for the day increasing their overall lead at the end of the day to 58 seconds making them the first international team to be on the top spot of the podium for any category in Targa Wrest Point.

Chris Bayman, Director Marketing Renault Australia, said; “I would like to extend my congratulations to the Red Back Racing team for the excellent result at Targa Wrest Point. The whole team has certainly proven their competitiveness and we are looking forward to seeing them compete in the upcoming Targa Tasmania in April.”

With Adam in impressive form and Bunj fresh on the back of his first win, Targa Tasmania 2013 is going to be a fantastic event and the team are aiming to get both crews on the podium for Australia's ultimate Tarmac rally .
The team at Redback Racing would once again like to take this opportunity to thank our major sponsors RDA/EBC Brakes, Hi-Tec Batteries, Motul and Corporate Impressions Australia for supporting us and thus enabling us to compete. We would also like to thank Nuance Communications, Cyara, World Manuals, Dimension Data and Holly Connects for their continued support, and welcome South Australian Paint Tech who have come on board to supply us some advanced Tyre Monitoring systems for the up and coming events 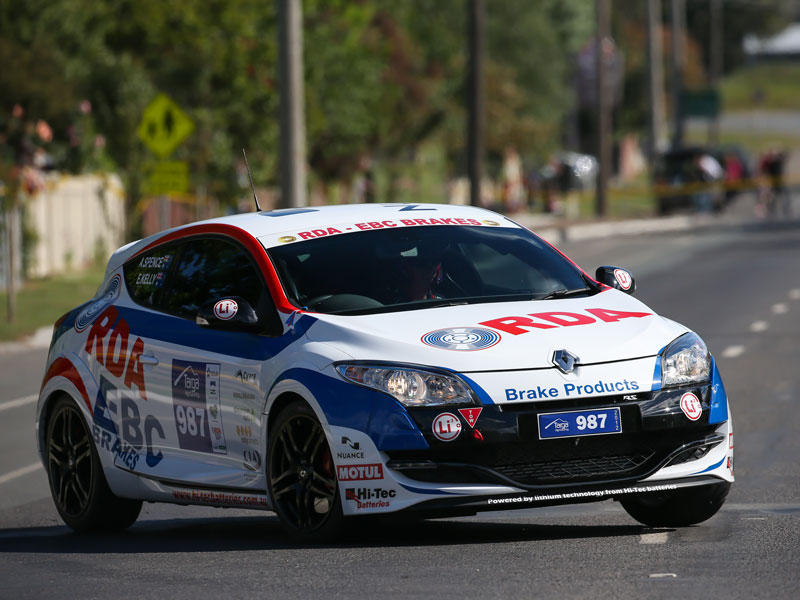 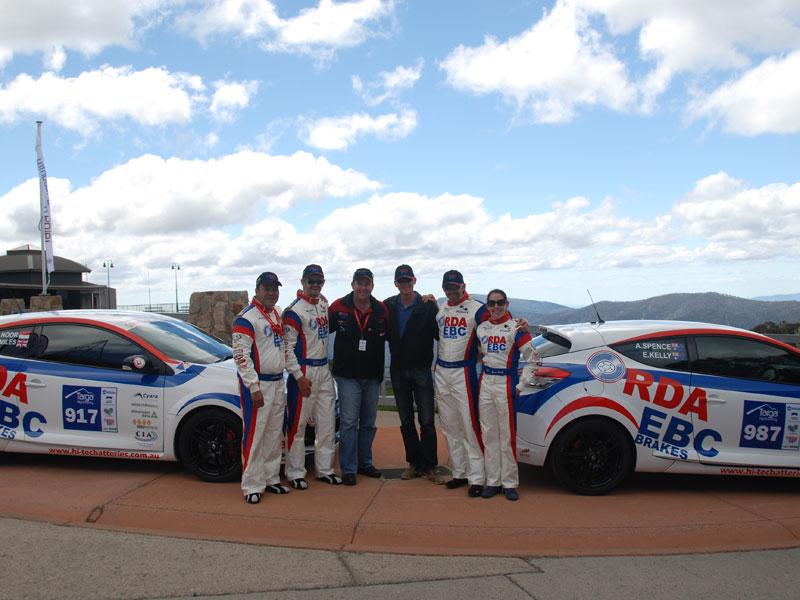 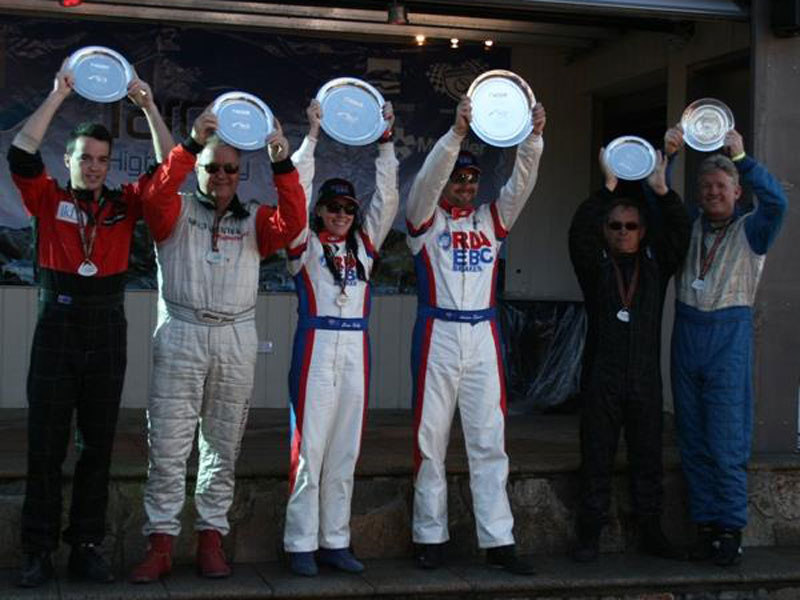 RedBack Racing has convincingly debuted the Renault Megane RS250. The car of Adam Spence and Erin Kelly dominated the second round of the Australian Targa Championship at the Mt Buller hosted Targa High Country winning all bar a one stage in the 16 stage event.

The teams second car of Indonesian Bunjamin Noor and British/Australian Lee Challoner-Miles clawed back a gap after a small issue on Day one to cross the finish line on day two just 2 seconds from a third place podium finish.

Team Principal, Adam Spence, said; “I always believed that the Renault Megane RS250 would be the fastest car available on the Australian Market under $100,000. We just did not realise it would be this good!”

“I would also like to take the time to thank our major sponsors RDA/EBC Brakes, Hi-Tec Batteries, Motul and Corporate Impressions Australia for supporting us and thus enabling us to compete in what was our most successful outing as a team. I would also like to thank our other sponsors Nuance Communications, Cyara, World Manuals, Dimension Data and Holly Connects for their continued support,” said Adam.